As we take a moment to remember 911, I am reminded of how I felt that September morning.  Where were you?  Do you remember?  How were you affected?  I was at home eating a bowl of cereal watching a home remodel program on HGTV.  I lived in an older craftsman style home that a friend, my son, Bryce, & I had been remodeling for 5 weeks. HGTV was my umbilical cord!  CNN interrupted the program & aired the buildings being hit by planes.  While watching, my phone began ringing. I was numb & in a mini state of shock.  Kayline, my BFF, was traveling cross-country with her husband called to discuss what was happening.  Immediately I contacted my daughter & her husband, who were living in Colorado at the time. I had to hear her voice!   My son was in Jr. High school & all I wanted to do was pick him up & bring him home.  To this day he thinks I was crazy, but at that moment, who knew what attacks were next?  Yes, I realize Louisiana probably wasn’t a target, but if something happened, I wanted to be with my loved ones.   I contacted Kayline after picking Bryce up from school & they were outside of Pennsylvania. Due to a load reassignment, wouldn’t be anywhere near where the plane went down.  Thank you Jesus!

Watching this devastating event destroy part of our nation & threaten our freedom broke my heart.  Understanding the network & preparation that went into this plan sparked widespread panic. What was next?  All I could do was cry.  As a nurse, I dealt with death & dying on a daily basis, yet no words or news report could define this atrocity.  Just the week before a local radio station had a poll asking people to vote on their favorite public servants.  Mine was firemen.  I watched as thousands of public workers risked their lives to save those they never knew who were attacked from an unknown source.  The courage exhibited by volunteers was & is unsurpassed.  I just simply couldn’t imagine the devastation.

The only other person I couldn’t locate was an ER nurse friend of mine who was working a travel assignment.  I had no idea of where he was working & prayed for his safety. I also prayed God would let me know he was safe.  He was my buddy & this greatly concerned me.  Somehow….within the next few weeks out of the blue, I found his number.  Not knowing if it was still valid, I called & he was in AZ.  This was a great thing b/c when he left Louisiana, he was not at a good place with God.  During this call, he admitted he was so thankful I thought of him.  He not only had a relationship with God, but was the happiest he’d ever been.  Tragedy of a nation, concern of a friend’s well-being, allowed me to discover my bud now loved Jesus.

On Bryce’s birthday, September 14, 2001,  I left home for a 13wk. assignment in Tupelo, MS.  As a single mom, this was the hardest thing for me to do.  I secured a terrific “nanny” & just believed things would be OK!  I came home weekly, cried less, but continued to be extremely emotional for our nation.  Anthrax followed & the threats continued.  Travel was impossible, the economy went south & fear attempted to encompass all things we knew & trusted.

Fast forward to September 11, 2012. There was no front page reminder of this anniversary in New York newspapers.  Politicians did not call out the names of those lives lost that unforgettable day.  Diseases mount as a result environmental exposures from the clean up process.  The war continues as our troops represent a wounded, yet powerful nation determined to secure peace for others.  Controversy about this being an inside job lingers.  All in all…..I believe this sign from the Pentagon says it all: 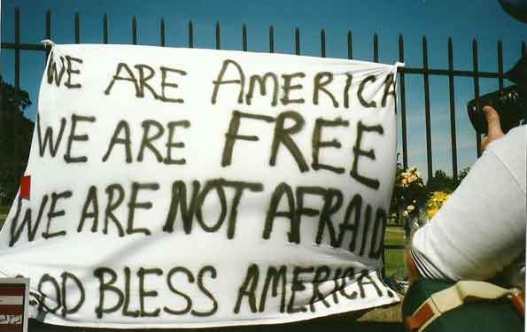 Most of all, we can’t forget this affected ALL Americans in proportions we’ll never understand. We watched a nation embrace it’s freedom & courage was birthed in measures people never knew they had.  I’m reminded of one of my favorite scriptures, “You intended to harm me, but God intended it for good to accomplish what is now being done, the saving of many lives.” Genesis 50:20

Because of our remembrance, we embrace those things most valuable to us as this event taught us how quickly we can lose them.

I will never forget & continue to pray for our great nation.

Error: Twitter did not respond. Please wait a few minutes and refresh this page.